New device development doesn't always start out with a single clean vision of the final product.  Often the product is a bit fuzzy because the knowledge of all the capabilities is uncertain.  There can be different visions fragmented by the different domains.  For example, marketing's vision isn't the same as the vision from software engineering, which is different from electrical/mechanical engineering's vision.  There are unknown areas of overlap as well as areas of non-overlap.

Still, there are questions about the overall vision that have to guide the product's R&D.  At first they can be expressed as questions that research seeks to answer:
There are many mutually dependent questions that need to be answered and some are critical.  How many products have you seen that have failed because, although they may have done most things right, they did a few crucial things wrong (like battery life).

Unfortunately for hardware-based products, we usually can't iterate rapidly on the entire product from the start, at least not well enough to discover these issues.  We still want a cross-discipline approach to our vision, even if  development doesn't support it.

Consider a simple scenario:  We have a set of new technology that we want to leverage into a
new product, for example the first generation iPod.  A key technical development that allowed the iPod was the famous "click wheel".  The click wheel allowed for a tactile intuitive user interface.  It was a big part of the iPod's success, but not the only part.  The design aesthetic, storage space and battery life were all part of the device's success.

(note: although Apple has been a client of mine, I did not work with the iPod team or know anything about the iPod development.  This example is speculative or based on published descriptions from employees). 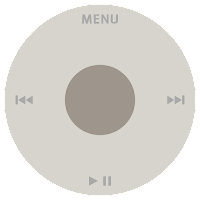 Before the iPod, the market for mp3 players was saturated by hard-to-use, cheap players.  The vision for the iPod started by addressing what the current market lacked.  So the team explored design aesthetics, batteries, small, high-capacity storage devices and interfaces.  All of these areas of exploration overlapped with the vision of a small, easy-to-use player that could store many songs and which the user would be proud to own.

There was a certain amount of research that went into exploring each area of the iPod.  1.8 inch hard drives had been out for awhile, but newer 1-inch drives showed promise eventually.  Cost and capacity factors led to the 1.8-inch drives being chosen.  This had an impact on all the other areas.

So how do we work with separate groups researching separate areas of a new device, when it's too early to precisely define the device and impractical to iterate on a nearly-shippable version?

Can Agile/Lean Be Used?

Agile & lean practices are designed to explore emerging new products.  They aren't restricted to software products.  Its benefits can be applied for research as well.  However, implementations of agile for software development focus on a few areas that might not be available to most new device developers:
The concerns raised about applying agile can come from both the stakeholders and researchers as well:
To overcome these limits and concerns, I list some proven tips for using agile for R&D work:

Align your vision with research goals

Research has to align with the ultimate product's vision.  But sometimes a single product's vision depends on the results of research.   How do we reconcile these mutually dependent things?

The vision for a new device can start with a set of capabilities in a concept that we assume will change as we learn more.  It's critical that the people in R&D have a shared broad vision of the product they are researching.  This is where chartering techniques can help.  These techniques help create a shared vision far more effectively than passing around a large document:
Check out some of the pitch videos made for crowd-sourcing campaigns.  Many of these show what their devices might look like and how they would be used so they  generate enough excitement to draw millions of dollars of funding.  Isn't that level of excitement as valuable for those making your product?

Spikes are user stories that limit the amount of time spent working on them.  They also are meant to produce knowledge that can't be estimated in scope up front.

An effective way of using spikes is called "Hypothesis-Driven Development".  One template for for HDD spikes is: 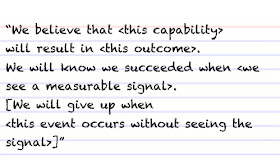 An example of this is:

We believe that implementing algorithm X will result in sufficient accuracy.  We will know we succeeded when we get 95% accuracy from our test data in the lab.  We will give up when we spend a full sprint without seeing this accuracy improve beyond 50%".

Set-based design is a design approach for considering a wide range of separate domain research that have overlapping and non-overlapping areas: 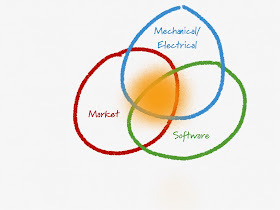 The approach is to explore an emerging product vision by exploring the range of separate domains and areas they overlap (orange area).   The idea is for research activities to refine the entire domain and converge on the best-shared solution.   This is fundamentally different from "point-based design" where the solution is chosen up front and the domains are forced to implement that point.  Knowledge of what works and what doesn't usually emerges as deviations from the point-based plan and considered as negative impacts to cost or schedule.

For example, suppose the iPod team had decided that the first iPod would have a touch-screen driven interface with solid state memory.  That's a potentially better product than the first generation iPod (in fact it's what the iPod eventually became), but in 2001, due to the existing technology, the memory may have been limited and the touch screen too battery draining.  Having gone down the long path of designing this device, Apple might have released a compromised or much-delayed product.

The Cost of Set-based Design

Set-based design can cost more in the short-term, but it can save your product in the long term.  To illustrate, if we had several contenders for a technical solution--all with various risks and costs associated--how would we work?  If each took a month to evaluate, we could be pushing out the ship date by many more months.

The answer is to research the solutions in parallel and to focus on failing each fast.  For the example of a touch-screen vs. click wheel on the first iPod, we'd focus on the areas of risk first.  How does each feel?  What is the cost of implementing each?  What is the power consumption?  We'd try to get these answers addressed  before making any further decisions (an iPod example is the creation of dozens of prototype cases, which Steve Jobs would choose from).

This tactic of avoid decisions made without sufficient knowledge is referred to as "deferring solutions until the last responsible moment".  We make better decisions when we know more, but we don't want to be in manufacturing when we decide to change the case.

These days, with on-demand rapid prototyping, 3D printing, emulation, etc. we can shorten the experimental cycle on hardware dramatically allowing us to do set-based design far more effectively.


Stage Gates
A project to create and ship a new device will change states and practices as it progresses.  Work will transition from researching foundation forms and technologies to prototyping the whole device to designing the production flow and moving into production.  These are stages can't be combined into each iteration as well as software-only products can, but the traditional problems that stage-gate development encounters can be mitigated with lean practices (this will be addressed in future articles).

Critical Path Management
The emerging vision of the device and the knowledge of what's possible will lead to the identification of a series of dependent activities or goals that need to occur before the device is ready for the prototype of production stage.  Identifying these paths and focusing efforts on improving flow through them starts early.

Conclusion
Many advances in hardware development practices (such as 3D printing, field-programmable gate arrays, etc.) have allowed teams developing hardware to benefit from the practices that software developers have been exploring for over a decade.  While iterating on an electrical or mechanical feature isn't as rapid as recompiling code, it's allowing more and more iteration and exploration into making better products.

Further Reading
Check out the amazing work that fellow CST Joe Little has done on Wikispeed, applying Scrum deeply in the development of a 100 mpg car!